You Can Have It All--Just Not at the Same Time

The winter blues have officially set in—and not just because we're buried in fifteen inches of new snow and vacation is now a fading memory. It dawned on me this morning that in June it will be five years since my novel, THE GREATEST MAN IN CEDAR HOLE, was released in hardcover.

Oh, my. Time has certainly slipped away from me.

Knowing that five years have passed and I have not published anything makes me feel quite panicky, I assure you, though I’m a little less panicky than I used to be. The first and second anniversaries of the paperback edition gave me the prickly sweats and led to many sleepless nights. If I had had a project in the pipeline, it wouldn’t have been so bad. But I had nothing. I was losing momentum. The more I white-knuckled it, the harder it was to write.

So, I relaxed. An idea finally did come to me, but the problem was more about time than will. Being the mother of very active, preschool-aged twins leaves me with very little mental or physical energy to be productive. It used to be that when I had a moment to be still, a narrative would constantly be flowing in my head. Now, when I find that rare moment of quiet, I hear nothing.

When I started my writing career, I was single, living in , and producing four books a year as a ghostwriter in addition to working full-time at a literary agency. I lived with a constant adrenaline rush, always facing a deadline or having a book coming out. It felt great to be doing the very thing I loved the most. In six years, I produced 14 books, though I won’t pretend for a minute that ghostwriting teen books is anywhere as difficult as writing an adult literary novel. It took me five years to do that, largely because I am a very slow, deliberate writer.

I remember a conversation I had with some housemates (I lived in a boarding house) about work and relationships, and someone brought up an old adage that has many different permutations, but his version was this: “You can have a great relationship, a great social life, and a career, but not all three at the same time.” Everyone at the table looked at me, as though I was the apparent exception to this, but I assured them that even though I had a great relationship and a career I loved, I had no social life at all. This seemed to bring great relief to my housemates, who all felt that they were lacking in some aspect of this trinity of happiness.

I used to think that people who complained about not being able to “have it all” just weren’t trying hard enough, but now I’m thinking that the rule of three is probably true for most of us. I still have the great relationship (and now family life), I have a great network of friends (though some of you keep moving away), but at the moment, no career. There are some people who appear to have no trouble with this balancing act—Soule Mama, for example—but I have yet to figure out the trick to having success on all fronts. Every time I focus on one aspect of my life—writing, for example—something else goes to hell, like the housekeeping. Every time I put out a fire, I inadvertently start a new one someplace else.

I take the edge off my panic by telling myself that there is a time for everything, and right now, it’s my time to be a mother. In two years they’ll be in school full time and I’ll have a much easier time with my juggling act, so enjoy the moment. And I really do. But I’ll never fully surrender to literary idleness, either. My moments of creation are so rare but they still give me such deep satisfaction that giving up just isn’t an option. As far as my career goes, I'm thinking I may have to re-adjust my expectations just a little.

(P.S. If anyone familiar with Blogger can help me with my inconsistent fonts, I would really appreciate it. For some reason, I can't fix this problem.)

Dig Out Those Crayons 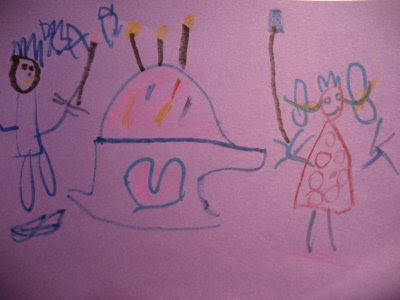 The other day I was cleaning up after one of my children’s many creative projects and found that I had a giant pile of art work to contend with. Although everything they create, in my eyes, is a masterpiece, most of it quickly makes its way to the recycle bin. I usually pick one or two outstanding pieces from each session and toss the rest; if I didn’t, we would be drowning in paper due to the sheer volume of art they make each day.

How wonderful to be so prolific, to create with such abandon. They have yet to find their inner (and outer) critics and I hope they can hold onto their freedom for as long as possible. As I disposed of piles of self-portraits and abstracts pieces (and tried not to feel guilty for doing so), I came to the idea that my children did not expect me to keep every scrap. For them it was more about the process than the result. The sheer joy of creation was what they were after. Whatever they make, they do it for themselves first, then show me for approval. As every parent knows, my job is not to critique, but to bear witness to their creation. Once I have seen what they have done, the piece is quickly cast aside and a new work is in progress.

Learning to enjoy the creative process without judgment is an old refrain, but we need to be reminded of it often. When was the last time you created something purely for joy, without the attachment of expectations? How many of us write for ourselves, alone, without worrying about what agents want, or how big our advance will be, or if Steven Spielberg will want to buy the movie rights?

Today, create something for you, alone. Just for the fun of it.
Posted by Stephanie Doyon at 7:22 PM 1 comment:

My family and I just returned from a great mid-winter trip to Florida. Although it was pretty chilly for much of the trip, the sun felt great.

Just before we left, my two young daughters and I were sick with bad colds. After dinner one evening, when they started feeling better but I was still in rough shape, they begged me to play with them. I didn't have the energy for play or for even reading to them, so we cuddled on the couch, I closed my eyes, and told them a story.

The story that came out surprised me. I had no idea where it was going and was too sick to care, so I just let it flow. After I finally put the girls to bed that night, I sat down at my computer and wrote down the story. Even after re-reading the story several days later, I still really liked it. And even though I know every mother on the planet thinks they can write a children's book, I'm still going to see if I can get it published. What have I got to lose?

Right now, I'm re-working the story...a lot. It's very far from perfect and it has actually changed a lot from its original form. Then I'm going to see if I can get an agent. According to the children's book authors I've spoken with, usually you have to try to sell the book to a publisher first before a children's book agent will be interested, which is totally backwards from the adult market. Even though this is the conventional method, my plan is to contact a few agents I know first, and if that fails, I'll go the regular route.