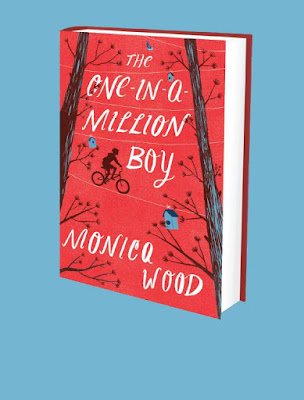 Not to sound like too much of a fan girl, but I love Monica Wood.

Her work is tender and evocative. She gives the best readings. And by all appearances, she's just a decent human being.

Basically, I want to be Monica Wood when I grow up.

A few weeks ago, I saw that Ms. Wood had a new novel coming out and on a whim I asked her for a quick interview. To my delight, she agreed. Below, you'll find our conversation and a promo video of Monica describing her new book, THE ONE-IN-A-MILLION BOY.

Years ago, every day looked about the same, but my professional life is far more complicated now. I spend a ridiculous amount of time on email, for example, managing the business of a full time professional writer. I usually have a stack of manuscripts that people have asked me to read. So my writing time is ever more precious, and I guard it jealousy. I am naturally a night owl but because I married an early bird my writing time is midday, about 10 until 3. Given my druthers, I would write all night and sleep till noon.

One thing I should mention if any young writers are reading this. I turn off all devices while writing. I don't have internet access on my laptop, which is where I write. Instead, I have a separate computer to connect to the wider world.

I had the good fortune of attending one of your events and it was the most entertaining reading I’ve ever seen. You have a terrific way of engaging the audience. You read just enough to whet the audience’s appetite and then weave in anecdotes and stories from your own life. What are your secrets for giving a great reading?

Experience helps. You learn over time to select not your best stuff, necessarily, but the best stuff to read aloud. Look for a lot of white space on the page; that's a good rule of thumb. Also feel free to heavily edit. The audience doesn't need a lot of context. I have also learned over time an audience would rather have you speak about the book then read at length. I usually read for about 20 minutes in 10 minute segments, between which I talk about different aspects of the book itself or the writing of it.


Last year your first play “Papermaker” was brought to life by the Portland Stage Company an drew wide acclaim. How did it compare to the world of novel writing?

There is simply no comparison between writing a novel and writing a play.

With a play you need constant input from readers, actors, and a good director. I was crazy lucky to have all of the above. With the play I had all kinds of people rowing the boat with me. What a difference from typing alone in a room. For years. With no input from anyone. Alone. Did I already say alone?

It must be magical to see actors embody your characters.

It is indeed magical, but it requires a huge willingness to let go. Actors are interpreting your words and you have to give them room to surprise you. Some of my favorite moments in PAPERMAKER were quite different from my original intention. Also, every performance is different. I both dread and look forward to seeing the play with another cast.


In your new novel, THE ONE-IN-A-MILLION BOY, you do something rather unusual--you kill off the title character on page two (I don't think I'm spoiling anything here!), yet his character continues to influence the story throughout. Was this your original intention, or did the idea evolve during the writing process?

Most things happen as I am writing, but this wasn't one of them. The challenge for me was to keep the boy alive for the reader throughout the book and I think I accomplished that. The boy appears so often - through lists he composed, recordings he made with his elderly friend, and flashback scenes -- that many readers forget he's dead. This challenge led to some structural quirks that I like.

Another unusual choice is that you never reveal the boy's name--why?

Every time I started to name him it felt wrong. To name him was to pin him to the earth, but he no longer is of the earth. he does actually have a name but only I, my husband, and my oldest sister know what it is. She named him.

The cover is gorgeous. Did you have a hand in choosing the design, or was it a complete surprise to you?

Oh, boy, is this ever a long story! I hated this cover with a red hot passion but everyone from sales and marketing adored it. I thought it was too whimsical for the content , and I despised the literal depiction of a boy on a bicycle. My US publisher agreed to alter the cover. But then my UK publisher went nuts over the American cover, their sales and marketing people went nuts, and so I finally caved. And they were dead right, of course: most of the countries publishing this book are using the original cover. Lesson: writers should stick to writing and leave selling to the sellers.

It can be a fine line knowing when to stick to your guns and when to defer to the 'experts'. When it comes to editing, how do you react to those occasional suggestions that seem to come out of left field?

I have worked with a lot of editors over the years, and very very seldom have I had to put my foot down. I can honestly say that an editor has never given me terrible advice. This is not to say I have never had disputes, but I have always found that the best way to handle differences with an editor is to take a deep breath, step back, and try to see the manuscript afresh. They are frequently right. At the same time, we must not forget that as writers we have the right to say no. Lots of new writers are afraid to say no because they fear alienating the editor. But editors expect give and take. They thrive on it! The world will not end if you speak your mind.

Posted by Stephanie Doyon at 10:31 AM