An Interview with Judy Sheehan 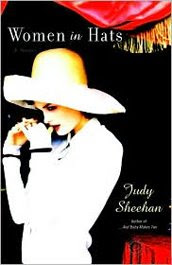 I had the pleasure of meeting Judy Sheehan at a panel reading for young authors at Book Expo a few years ago. She stole the show as she read an excerpt from her first novel, AND BABY MAKES TWO. Actually, she didn’t read the story so much as she performed it, using different voices for each character and delivering the lines with perfect comedic timing. It came as no surprise when I learned of her theatre background: Judy was one of the original cast members/creators of the long-running, off-Broadway hit, Tony ‘n Tina’s Wedding.

Judy decided ultimately that acting wasn’t for her, but went on to be an accomplished playwright. She became the playwright-in-residence at ’s prestigious Looking Glass Theatre. One of her plays, Alice in Ireland, has been produced all over the and has won several awards. She has also created a series of musicals for children.

Eight years ago, Judy traveled to to adopt a child. Her experiences as an adoptive mom and single parent informed her first novel, AND BABY MAKES TWO. I found the story to be laugh-out-loud funny and very poignant. Now, with the release of her second novel, WOMEN IN HATS, Judy has decided to tackle another subject close to her heart—the theatre.

SD: In this blog I’ve discussed the difficulty some writers have getting themselves to sit down and write. Do you struggle with discipline?

JS: Yes – you can tell when I’m getting ready to write because my house is immaculate and my laundry is done. Sometimes, I’ll do all that stuff and more, before I sit down to write. I’m very resourceful when it comes to not writing. But I’ve developed a few tricks to force my sense of discipline towards writing. First, I have to retreat to a wifi café, rather than write at home. I can distract myself with tea and something to eat (I have a manic need for a chocolate chip cookie when I write). Getting myself fed takes a little while, but it doesn’t require nearly as much time as cleaning the bathroom. When I’m home, I can find a million distractions, while the anonymity of the crowd at the wifi café forces me to focus on my work.

Next trick: my iPod. I have a playlist that is designed to serve as musical wallpaper for writing. I’ll pick a song that gets me started, and then have an almost Pavlovian response to it, so that I have to put my fingers on the keyboard and get to work. It also adds to that isolation that I need so that I can have tunnel vision between me and the screen.

My final trick: I don’t start writing, I start re-writing. I’ve heard lots of people say that you should just keep moving forward through a book, but I break that rule. I’ll go back to yesterday’s writing and revise what I did. It gives me a kind of traction to get me going. And it’s slightly less intimidating than starting on a fresh blank page.
SD: Is your approach different when you are writing a play versus a novel? Are plays easier because you’re just writing dialogue or are they harder because of it?

JS: Novels have felt infinitely harder for me—which really makes me wonder why I’ve taken them up. Plays require me to leave room for collaboration with actors, directors, and so on. I have lots of room to set them up, but I never want to restrict them or narrow their contribution. I certainly don’t want to make a good play sound like it’s easy to write—it isn’t. But a novel works at a much higher level of difficulty.

The weirdest part for me here is each book seems to get harder. The first book was tied enough to my own life that I absolutely knew where I was going. The second book was a mash-up of two plays (new math – 1 play + 1 play = 1 novel) and I had a clue about the road I was traveling, although I did get lost a few times. The third book, which is currently in progress, is the biggest challenge yet. I’m not completely confident that I’ll survive this one.

SD: I’m assuming one of the inspirations for this book was the play you wrote by the same name.

JS: That play absolutely inspired this one, and the play itself was based on watching a friend of mine direct a play many years ago. This was to be his break into commercial, big-time theater, whereas he had been more of a fringe, not-for-profit guy up until then. The play was an unmitigated disaster in every way. He called me in to doctor the script, but the playwright wouldn’t let anyone touch it. At the time, it was a nightmare, but we both laugh about it now.

But I also wove in the story of another play, Alice in Ireland, which has a darker feel to it. Leigh takes on a lot of ’s mother issues. Bridie Hart, Leigh’s mother, came from that play. At this point, I feel that I know Bridie so well, I could write any scene or situation for her, and know exactly how she’d behave. Bridie is a good time.

SD: In AND BABY MAKES TWO, the main character, Jane, struggles to achieve her dream of becoming a mother. In WOMEN IN HATS, Leigh Majors (hilarious character name, by the way) has to contend with her difficult and very famous mother in order to make her dreams come true. Are these two books companion pieces?

JS: Not really, but it’s becoming clear to me that I have mother issues! Mother-daughter is one of the most wonderful, pain-in-the-ass, overwhelming and important relationships we have, and it offers such a wide array of stories to tell. I’m the tenth of twelve children, and my mother seemed to be a force of nature. She died almost ten years ago, and it seems as if she’s now passing into legend. Maybe she has turned out to be my muse. The book I’m writing now has four generations of women and girls in the same family, so I’m taking the whole mother issue to a new level.

SD: Your work deals with issues that confront the modern woman: single motherhood, finding the courage to break out of one’s comfort zone, perfectionism and fear of failure. You let us feel that it’s ok not to live up to impossible standards, which is something women don’t hear enough of.

JS: I hope that this is true. I hope that the women I write about are flawed, but brave and very recognizable. As the author, I have to live with these women for a long time, so I have to like them. If they intimidate me, I don’t want to spend a lot of time with them. Essentially, I’m just writing for myself, I suppose. Leigh and Jane have very different stories, but they both end up thawing from their sort of rigid state at the start of the book to a warmer, messier state at the end. That’s a more fun place to be.

SD: I love the way you are able to make a story both funny and poignant at the same time. Is humor something you purposely use to maintain a sense of levity, or is it a natural extension of your voice?

JS: When I was growing up, humor was really the coin of the realm in our house. If you could make it funny, you could get away with murder. At this point, it’s almost an unconscious choice for me to seek out the comic perspective in any story. For a while there, this reflex made me dismiss my writing as Lite Reading or Chick Lit. But I’ve had a few people talk to me about the grief that the characters experience, the darker events and the serious storylines. I’ve let them convince me that the books have really got substance.

When I was writing some of the more emotional scenes in my books, I really got caught up in those feelings. I was miserable and depressed after I wrote the mother’s funeral scene in AND BABY MAKES TWO. But I was elated after I wrote the adoption scene in that book. Obviously, I’m a method writer.

SD: What concerns you as a writer?

JS: That everyone will discover that I’m a fraud. Seriously, I question myself pretty harshly, all the time. I worry about being cliché, about repeating myself, and about boring the reader. Are all writers completely insecure about their work? In addition to all this, I worry that my worries make me cave in too easily to suggestions, edits and revisions. So yes, I worry about worrying. It’s a sickness.

JS: Writing life and family life are polar opposites. The only way that I can get my writing done is to carve out time, separate from family time. On Saturdays, my daughter’s godfather takes her to a dance class, and then sometimes to a park or museum afterwards. I’m writing during that whole time. When I’m really disciplined, I fire up the laptop while she’s settling into bed at night. I go right from lights out, to writing. That part is especially hard to do, and it sometimes makes me feel like a martyr, which is a very bad thing. I’m single, so there is no partner to take care of (or to take care of me). It’s hard. I remember hearing Anne Lamott say that “if you can’t write under your current circumstances, you can’t write.” That line scared me into a tough work ethic: I have a full-time job, I’m a single mother, and I’m writing my third novel. God, that was an exhausting sentence to write. I get my sense of drive from my mother, as you might be able to tell. There are times when I wish that my life were simpler. I wish that I didn’t want to write. But I do. And I believe that I always will.
Posted by Stephanie Doyon at 2:24 PM

What an excellent interview. Procrastination, insecurity, the writing/family balancing act...and here I thought I was the only one.

Thanks so much for posting this.

Glad you liked it. Judy is terrific, and if you ever have the opportunity to go to one of her readings, I highly recommend it.

I'll be posting other interviews, here in there, with other creative people who may or may not be writers, but who will still shed some light on the creative process. Right now I have one tentatively planned with a friend of mine who is an actor. You might be surprised just how much actors and writers have in common when it comes to character development.