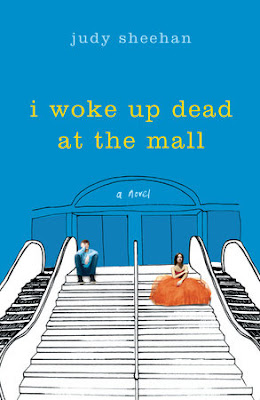 Judy Sheehan and I go way back. All the way back to 2005, when we were part of an emerging writers panel at Book Expo America. We probably chatted a sum total of thirty minutes but hit it off right away. Since then, we've kept in touch a little through social media and cheered on each other's writing careers. In 2008, I interviewed her upon the release of her second novel WOMEN IN HATS, which you can read here.

When I recently heard that Judy had a new novel coming out I just knew I had to ask for another interview. She graciously obliged. Her latest, entitled, I WOKE UP DEAD IN THE MALL, is Judy's first YA novel. Having just finished the book, I have to say it's a perfect fit--this is Judy's best work yet. Here's our conversation about the creative process, rejection, and the afterlife.

In our previous interview in 2008, you mentioned working on a third novel—was this it?

Oh ha ha ha ha ha. This is possibly my third third novel. Or is it my thirtieth third novel? It’s been a long, long road. I came back to this process so many times, I considered changing my last name to Sisyphus. I still have a file called “12pp.” It’s a twelve-page story that serves as a prologue to a book. But I have no idea what that book is. I had books that I finished, books that I dropped midway because they were dead in the water, and one book that got all the way to publishers before it gave up the ghost. So please imagine the stress levels I was soaring through when my agent sent I WOKE UP DEAD AT THE MALL out into the world. And of course, now it’s going much more public. Ack!

When I started the first chapter of your book, I was laughing out loud by the fifth sentence--which is probably a record for me. What inspired you to choose the Mall of America as the setting for the afterlife?

Thank you!  That was the goal! In an early draft of the book, the afterlife was its own special Mall, populated only by the dead. But then my super-smart agent suggested that I try setting it in a real Mall, and I went for the Mall of America. It felt so iconic. And there was a kind of logic in the location. The living never notice that the Mall is haunted, what with all the bright lights and free samples. And the dead have access to everything they need or want. My daughter and I even spent a few days at the Mall of America, in the spirit of research. And shoes. And Orange Julius.
As soon as I moved the characters into the Mall of America, the story accelerated in all the right ways. In this case, it feels like the living are almost haunting the dead, as Sarah and the others try to finish their unfinishable lives. And since the Mall of America is insanely big, it offered me lots of locations – a gorgeous aquarium, roller coasters, and so much more. It’s a self-contained universe over there. I now have a happy, almost proprietary feeling about the Mall of America. I never would have predicted that.

It's interesting how just the right detail can set everything in motion. I find that just a word or turn of phrase can suddenly unlock a character. How did you discover Sarah's voice?

I love this question, mostly because I have a very specific answer: parentheses. Yes, for me, it wasn’t a phrase, word, or even a sound—it was punctuation. All her life, Sarah has put herself on the sidelines. She has actively avoided being the center of attention, so naturally, her narration would contain a high volume of side comments. That’s how she’s been narrating her life for years and years.  Even when she’s really just thinking out loud, Sarah has a side comment that drops into parentheses. I think/hope that her use of parentheses diminishes as the story goes along. That was always the plan.

This idea grew out of a remark a college friend said to me, during our senior year. I whispered a comment mocking a professor, who absolutely deserved the mockery, I swear. Later, she dubbed me the Queen of the Asides, and I realized that those side comments had become quite a thing for me. And now I’ve handed them off to Sarah. (And she’s eternally grateful.)

This is your first foray into the world of Young Adult literature.
What sparked your interest in this genre?

My daughter got me started. When she became old enough to start reading Young Adult, I joined her because I probably have boundary issues. We even read a couple of books together. Really obscure ones, like THE FAULT IN OUR STARS and IF I STAY.  I was egged on by an online editorial that said that adults should not read Young Adult books. That made me want to both read and write them. Read or write whatever interests you, and don’t let an online snob stop you!


Amen! Was your publishing experience in YA different than for adult fiction?

It was mostly the same experience. And I think that this illustrates the fact that real grown-ups appreciate YA and any other genre of fiction. The one thing that's different for me with this book is the big bump forward in social media. I've had to dedicate a lot of time to ensure that I'm in touch with the YA bloggers, Twitter giveaways, Facebook pages, and author forums. Some of it is quite wonderful, since I get to create an introduction to my book, my characters, and me. But oh my, it's a lot. It makes me feel productive, but it isn't the same as actually writing. Sigh.

Meanwhile, I'm focusing on getting the word out to school librarians. Who knew they wielded so much power? I thought they were just there to shush me.

The truth is that I don't have a typical writing day because I shoehorn writing into days that refuse to be typical, or even mildly predictable.
When I'm really in the groove, the day tries to run like this: the morning is all about getting my daughter and me out the door. I go to work, where anything can happen. If it's a quiet day, well, how lucky that I brought my laptop with me. I can plug into Pandora and write. If it's a busy day, I wonder why I brought this laptop with me. Back home, I get dinner on the table (dinner is a pre-occupation for me), clean up, and then I sit down and really write. I don't sit at my desk, but at my dining table. I play my playlist or Pandora, and eat something cakey with cinnamon in it. I take breaks to check on my daughter and her homework. I write until my eyes hurt. That's when I know I'm done.

Rejection is a big part of any artist's life. How do you handle it?

Thankfully, most of it occurs over email, so I can pretend to be brave and noble about it when I reply. The truth is that it hurts, it gives me a stomachache and I hate it. I usually give myself a good 24-hour wallow, but after that, I just have to suck it up and move on. Life is busy, so wallows must be contained. The distractions of motherhood, life, and work can be a hindrance to getting writing done, but they are a balm when a rejection lands.

I get weirdly maternal about my characters, so a book rejection feels like someone just kicked my child. That would be my boundary issues rising up once more.
Just last week, I suffered a painful blow, and thought I was handling it with grim steeliness. But then an author that I barely know tweeted me that she was reading my new book and loved it. That tweet pushed me over the edge, and I had a good cry. And do you know what? I felt so much better after that.

Kate Atkinson walks on water. I met her at a book signing, and I asked her this exact question, and it threw her. I felt so terrible, I can't remember her answer!

Kent Haruf and Dawn Powell may have spent some time walking on water, just like Kate. Reading with my daughter, Michael Marpurgo's War Horse was one of the most moving books I've encountered. I felt that Where'd You Go, Bernadette?, by Maria Semple, and Gone Girl, by Gillian Flynn, both completely lived up to the hype.
After 9/11, I found myself immersed in children's literature. Later, I realized that I was probably reaching for a moral, ordered universe through books. I re-read (and loved) all of the Narnia books, the Anne of Green Gable books, and Madeleine L'Engle. It was escapism, and it was specifically helpful. Maybe it set the groundwork for me writing a YA novel today.

Any words of wisdom for aspiring writers?

Is it an act of hubris for me to dispense wisdom for aspiring writers? Too bad. You asked, so here goes:
Live your life. See every art form you can. Try every art form you can. Take jobs that make you learn new skills. Get your heart broken. Get confused. Read a lot -- and not just the books that seem tailor-made for you. Read things that seem unlikely for you. Talk to old people, young people, and people who disagree with you. Make some stupid choices, but not so stupid that you put your life in peril, because I'll worry about you, okay? Travel, as best you can, even if it just means finding a different commute to work or school. Pay attention.
These experiences will all enrich your writing, even if their impact doesn't seem obvious. Don't go for the obvious. Surprise us.
Posted by Stephanie Doyon at 10:11 AM