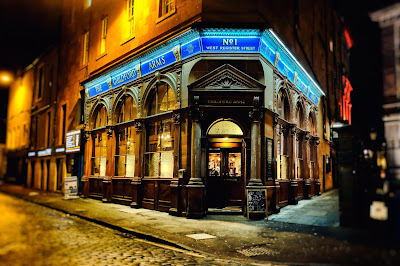 I recently heard this story:

A guy--let's call him Fred--managed a bar. He was only in his twenties, but he had a real knack for it. He was always coming up with innovative ways to draw a crowd. Under his management, Fred's bar became the most popular after-hours place in town. The business was wildly successful.

When Fred turned thirty, he decided it was time to grow up. He left his job at the bar and went to law school. He got his degree, passed the bar exam, and started practicing law. Fred now had a career, doing what he thought grown-ups should do. He was okay at it. He didn't love it.

One day, Fred ran into an old friend. They had lunch. The friend was impressed that Fred was now an attorney. Fred admitted it wasn't all he hoped it would be.

"You know what you should do?' the friend asked. "You should manage a bar."

Fred couldn't believe his ears. "I can't do that for the rest of my life! That's not a career!"

"But you know what?" the friend said. "You were great at it."


As I've written many times before, one of the biggest factors for success is follow-through. Starting a project is easy, but sticking with it after the initial excitement wears off and things get tough takes real work and tenacity.

But follow-through wasn't Fred's problem, was it? He went to law school, passed the bar, and became an attorney. Was he a success? On paper, I suppose, as our culture automatically equates certain occupations with success. On a personal level, though, Fred wasn't all that happy and his job performance was mediocre.

This got me to thinking that the recipe for success is really two-fold: Finish what you start AND Choose something you're naturally good at.

Fred's talent was in bar management, not law. He resisted the idea of running a bar because it didn't fit his image of success. Should Fred continue to practice law just because it seems to be a more respectable profession? Or should he focus on what he's best at? My guess is that with a little creative thinking, Fred could take those skills that made him a success and parlay them into a career that is more in line with his vision of himself.

Some people have tremendous tenacity, but they focus on the wrong thing. We've all seen those cringe-worthy American Idol auditions of tone-deaf singers that return year after year, swearing to never give up. Our hearts go out to them because we know they're never going to make it as singers and their extreme efforts, though admirable, feel wasted. We wonder why they can't turn that drive toward something they're actually good at.

Assuming you already have a gift for writing, you still need to be on the lookout for misplaced talent. A student in an MFA program may have the high-minded goal of publishing literary fiction when in fact he has the perfect skill set for writing mysteries. Another writer might think novels are a requirement for literary success, but she is great at writing short stories.

The good news is, as artists, our work will naturally guide us toward our abilities. The trick is not to let our egos get in the way. If you want to create serious fiction but everything you write comes out with a humorous twist, embrace it. If you want to be a literary writer, but you excel at genre fiction, embrace it. If you have your heart set on writing short stories but everything you write tends to expand into a novel, embrace it. Don't fight your natural abilities--embrace them.

Then never give up.

Posted by Stephanie Doyon at 9:05 AM